The information about these medals is my understanding a translation reported to me in broken Vietnamese/English. The first three are Vietnamese Bronze Stars for courage in the Kontum region during February 1973, awarded by three different levels of government. The gold bordered award is a unique creation ordered by the Commander of all the Vietnamese Military. It is for valor and one of a kind. 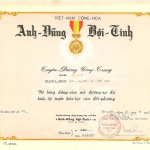