The information about these medals is my understanding a translation reported to me in broken Vietnamese/English. The last three are Vietnamese Bronze Stars for courage in the Kontum region during February 1973, awarded by three different levels of government. The gold bordered award is a unique creation ordered by the Commander of all the Vietnamese Military. It is for valor and one of a kind.

Four medals given to Wil Esplin by the Vietnamese Army and copies of the papers awarding the medals. 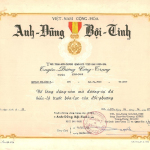 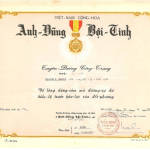 « Back to Colonel Esplin

In September 2017 Ken Burns will release a 10 part series about our war in Vietnam that will use social media in conjunction with the showings and I plan to join in (uninvited) and discuss each showing and document my reactions to some of the topics.