Indirect artillery fire required three component parts working in concert to deliver rounds where and when they were needed. Accurate fire began with an observer radioing our battery Fire Direction Control (FDC) requesting artillery shells at a specific map location. Then FDC computed the settings necessary for our guns to deliver rounds at the requested location. Those settings were telephoned from FDC to the Chief of Battery and the guns. The gun crews used the settings to prepare a specific artillery shell, shoved it into the gun tube, set the guns to the correct settings and fired the round when ordered.

The observer had to accurately locate the target on a grid map that he and FDC were both using. We knew that when he was identifying the map coordinates, he was making an educated guess. The second part of his job was observing the landing and explosion of our artillery and radioing directions, so we could properly adjust our gun settings and the next round(s) hit the target or landed closer than the first one. If the observer was under fire, we could “hear” that in his voice. The pace of his speech and the volume level said it all. In fact, we could feel it. Educated guesses were likely at this point.

If the observer was lost but had a “rough idea” of his map location, FDC computed settings for a 600-meter airburst of a smoke shell directly above the location we selected. When the ground observer saw the white smoke, he gave us directions from his location to the airburst and voila! We now had a place to start. Then we would shoot a second round and get more feedback, enabling us to triangulate the map points and establish the exact map location of the observer. The ground-based forward observer (FO) was most likely supplied to the infantry by an artillery battery. In an emergency, most soldiers who were paying attention could adjust artillery fire, but the more training an FO had, the sooner we would get rounds where he wanted them. Adjusting fire is a skill, and the more experience and training, the better it was for everyone. Me operating a FADAC computer. My photo

Helicopters were also involved in target observation and were critical for directing artillery fire. They were nearly everywhere in Vietnam and could arrive in the target area quickly. Someone in the helicopter took over fire adjustment from the ground observer, and we oriented the pilots to the gun target line. Altitude allowed the FO a clearer view of the target and helicopters became the most important tool for observing artillery fire in Vietnam. Take them away and we would have been fucked. It’s difficult to strike what you can’t see, and helicopters provided the view necessary to support our troops quickly and successfully.

Our job in FDC was computing instructions for howitzer crews and the settings for their guns. A large, flat table, called a plotting board, had a map divided into numbered 1,000-meter grids covering the tabletop. Our battery location was represented by a pin in the center of the map, and the observed grid coordinate location was designated by another pin. A large, metal straightedge (radial deflection fan) had two intersecting arms that met at 90 degrees with a metallic arc in-between. The straightedge had  its butt end hooked to the pin that represented us. This straightedge was moved against the pin representing the target and yielded the “deflection”, or left/right setting for the guns (A 360-degree circle was measured as 6400 mils in this system.).  A slide rule, designed to compute artillery instructions, books of firing tables, the above charting tables and a new FADAC digital computer were our weapons of war. On every fire mission, a backup plotting-table operator did the same computations to double-check accuracy. (On my homepage, there is a photo of me operating a FADAC computer.) 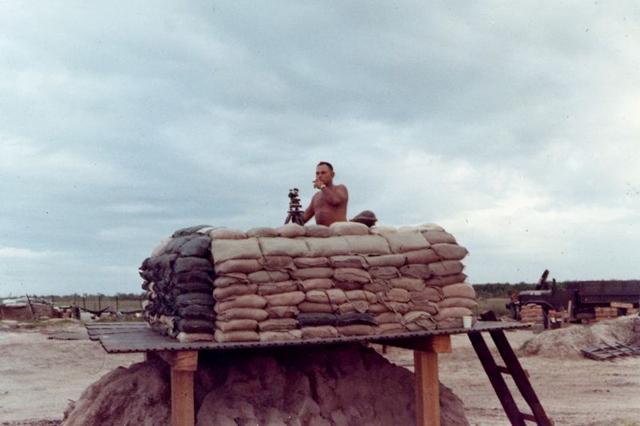 Percisely positioning the guns. My photo 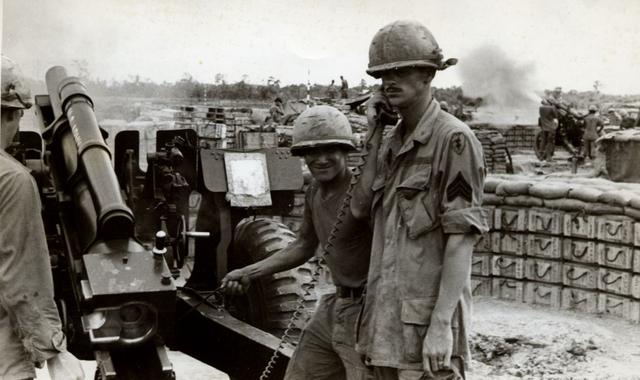 Radio communications linked us to the outside world, and a telephone system linked FDC to the guns. Air and ground clearances to fire came via radio, as did conversations with the observer. Getting permission to fire was often slow when we needed American ground clearance. American air clearance and Vietnamese ground clearance came from separate commands, but were necessary and required for the safety of everyone operating in our area. Telephone communication with the guns traveled through wire, often run on top of the ground, and the main weakness was that explosions (mortars in particular) would cut them, ending our phone communication.

Gun settings from FDC included shell type, the proper fuse and time setting (if the fuse required it), the number of powder bags to leave in the brass casing and settings for deflection and elevation for the gun. In theory, a round or rounds fired should hit the grid coordinate sent by the observer. But like so many things, the reality was not as theory assumed. Still, on most fire missions, we were able to get the third round on or very close to the requested coordinates.

The guns were now ready to fire. The fuse itself had settings and the number of powder bags to include and, at times, even a specific powder lot. Fuses could be time delayed and point detonated on impact, and we computed and included in our orders to the guns, the time to be set on the fuse. When under fire, we counted down the time to explosion at the delivery point to give our fellow soldiers a chance to duck. When assembled, the 105 round looked like a very large 22 rifle shell.

The biggest danger when shooting a 105mm howitzer was an artillery shell exploding inside the cannon tube before exiting and blowing the gun apart. The second serious danger was a shell hanging fire, meaning that it did not detonate when the firing pin smacked the fuse. At some point after that, the operator must decide to open the breach and have a look for the problem. A hang-fire explosion with the breach open could take out that gun crew, as well as adjoining crews, but peeking into the breach must be done. These dangerous possibilities were not in our minds when we were shooting. There was so much going on before, during and after combat. 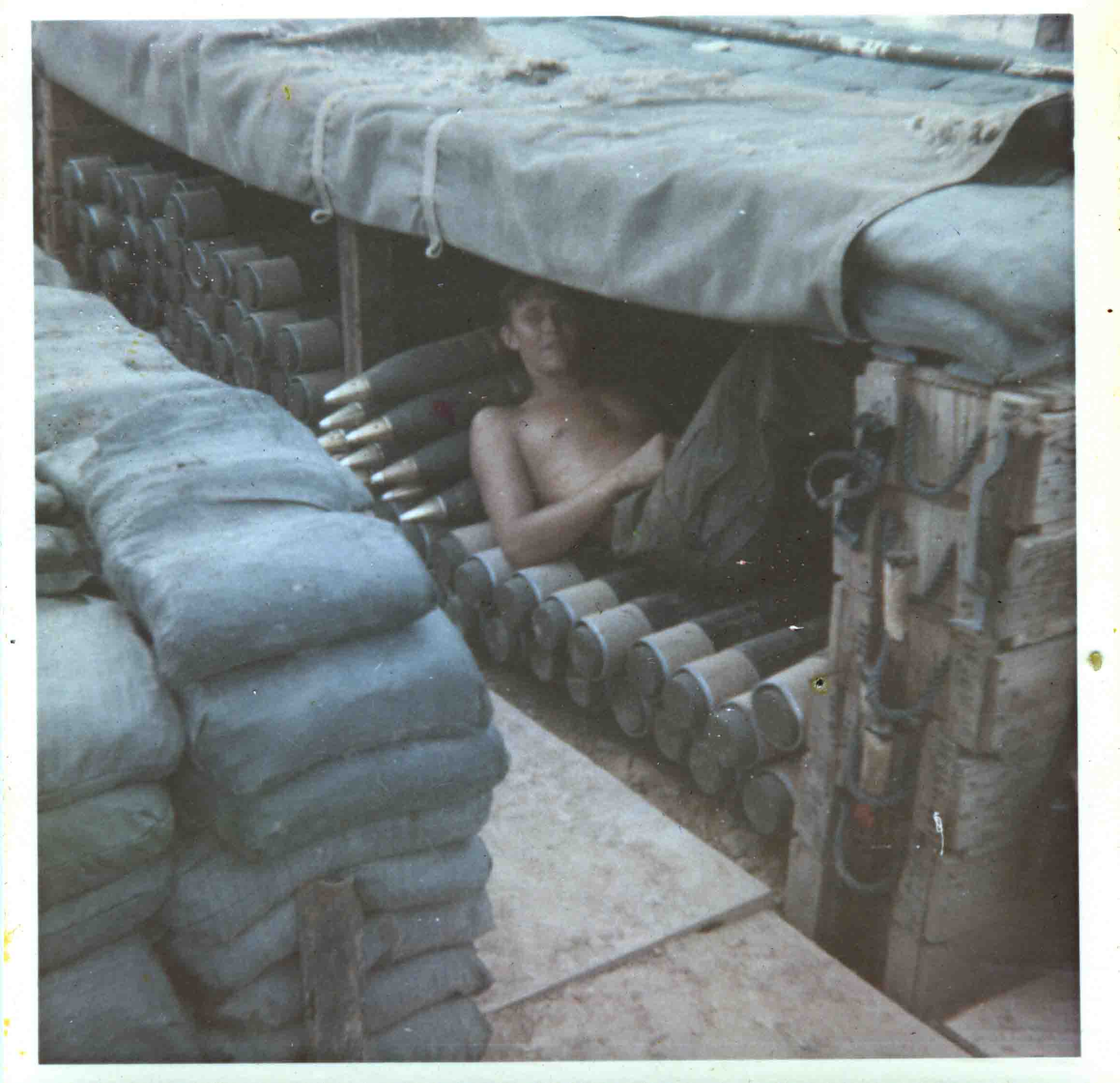 With many small rifles being shot, artillery rounds going off and jets dropping napalm or regular bombs, it was almost an unimaginable amount of simultaneous stimuli. The longer you are there, the more you can process, and you are so busy struggling with organizing information that during the act of firing, there is no time to be scared. The focus was totally on hitting the targets to help our guys. Military units are organized and operated to stay at their jobs no matter what and that leads to safer and more successful combat operations.

Deflection of the gun was set by aligning two aiming stakes with red and white stripes (like a barber pole) to a viewer looking through a small, periscope-like device. Lining the poles up in the site was the way to get the correct deflection setting. The close pole should hide the far pole to get the most accurate left/right settings. Several sets of these stakes were precisely placed around the gun so that no matter which direction a gun was fired, the deflection was set quickly and correctly.

The distance the round would travel to the target was determined by the elevation of the gun from level and the number of powder bags included in the brass casing. Weather could affect distance, but we ignored it in our computations because we did not have accurate information about weather.

After the shells landed, the observer radioed correction observations to FDC, and the cycle began again. Trash from preparing and shooting artillery shells piles up fast, and if we fired many hours without stopping, trash clogged up aisles inside the fire base. The wooden shipping boxes got in the way, and the fiber tubes, cardboard and other things added to mountains of wood boxes. Men not in the gun crews would be opening boxes, preparing ammunition and moving that ammunition and trash, so every battery member was involved. As the battle continued, we would run out of storage  room, which impeded fresh new ammo from reaching the guns. The unused powder bags were always a serious danger, as a single spark could ignite the pile and the compounded pressure of added bags could also detonate the bottom.

We were on duty 24/7, sleep deprived and walking around with the “thousand-yard stare” from less than four hours of sleep a night. Lack of sleep was stressful, but it didn’t keep us from doing our job. The desire to protect our troops and the nature of what we did as an artillery unit provided the adrenaline we needed. And that was a good thing, as we were always exhausted, and that’s when mistakes are more likely to happen, especially since we almost never had time to make up for lost sleep.

When our fire support base was attacked, our tactic was called indirect fire, and each individual gun crew was authorized to fire without being commanded. With each gun crew making its own decisions, more mistakes were likely, so we rapidly worked to establish a chain of command and communication because coordination made life safer and fire more effective. Our howitzers had two main shells to blunt an attack (direct fire). Most enemy soldiers attacking a fire base were within 100 yards of the perimeter and usually closer. Our shells exploding in that area were closer than regulation dictated, and backsplash was a danger to persons inside the base. Killer Junior was a high-explosive round (our normal shell in indirect fire) with a few seconds or less time set on a timed fuse and the howitzer barrel nearly level. It was, again in theory, meant to explode at 10 meters height, and most times it was about that height, but it deviated with any small error. The excitement of being attacked speeds up normal reaction time, and in the heat of battle, close can become good enough, but that must be controlled. The “Beehive” shell was our second option. It contained nearly 8,000 small darts and more powder than other rounds. These boys cleared a path for many tens of meters out, including vegetation up to the size of a small tree. 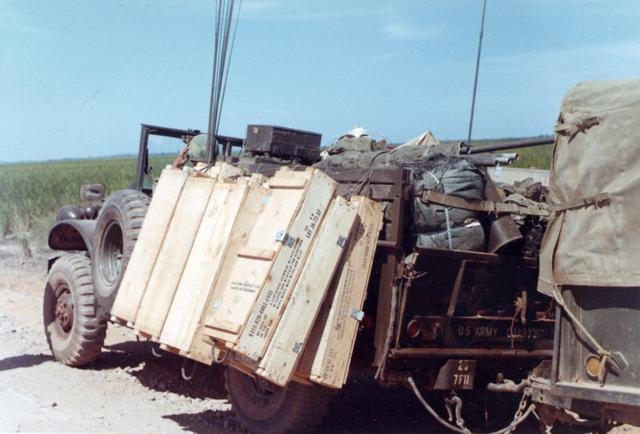 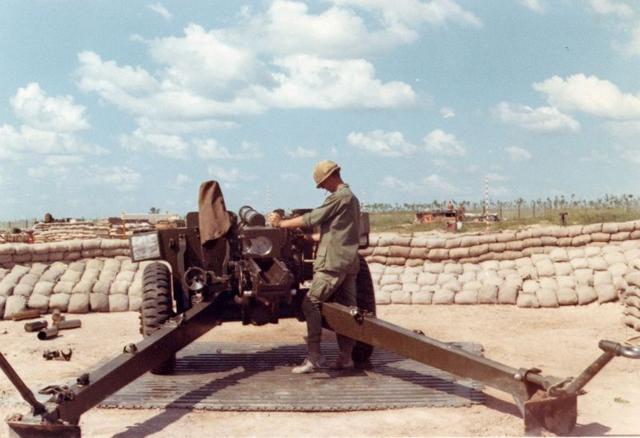 Direct fire moments are exciting in a way that has never been equaled in my life after Vietnam, and occasionally, in quiet moments, I remember them fondly. My brain says no, combat is dangerous to your health, but something inside me wants to remember and feel that high again.

Concussions from the many different sizes of explosions heaved my chest from the inside and something like fear, but not normal fear, demanded my body pump every drop of adrenaline I had each second. I operated much faster than normal, not thinking with words but something like knowledge stored in my DNA that propelled me to do the correct thing each microsecond. It felt like memories stored inside my cells from warriors in the past were operating me, and I was only along for the ride. I was Superman. 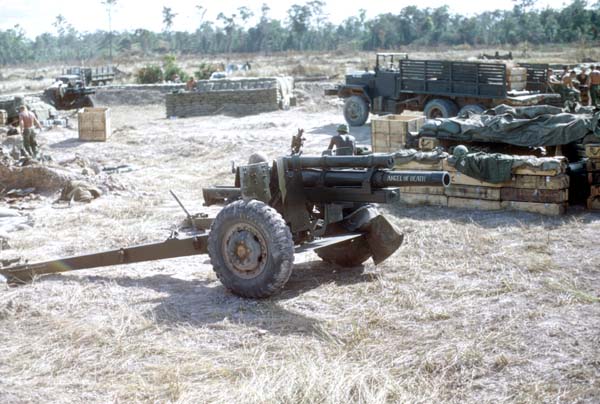 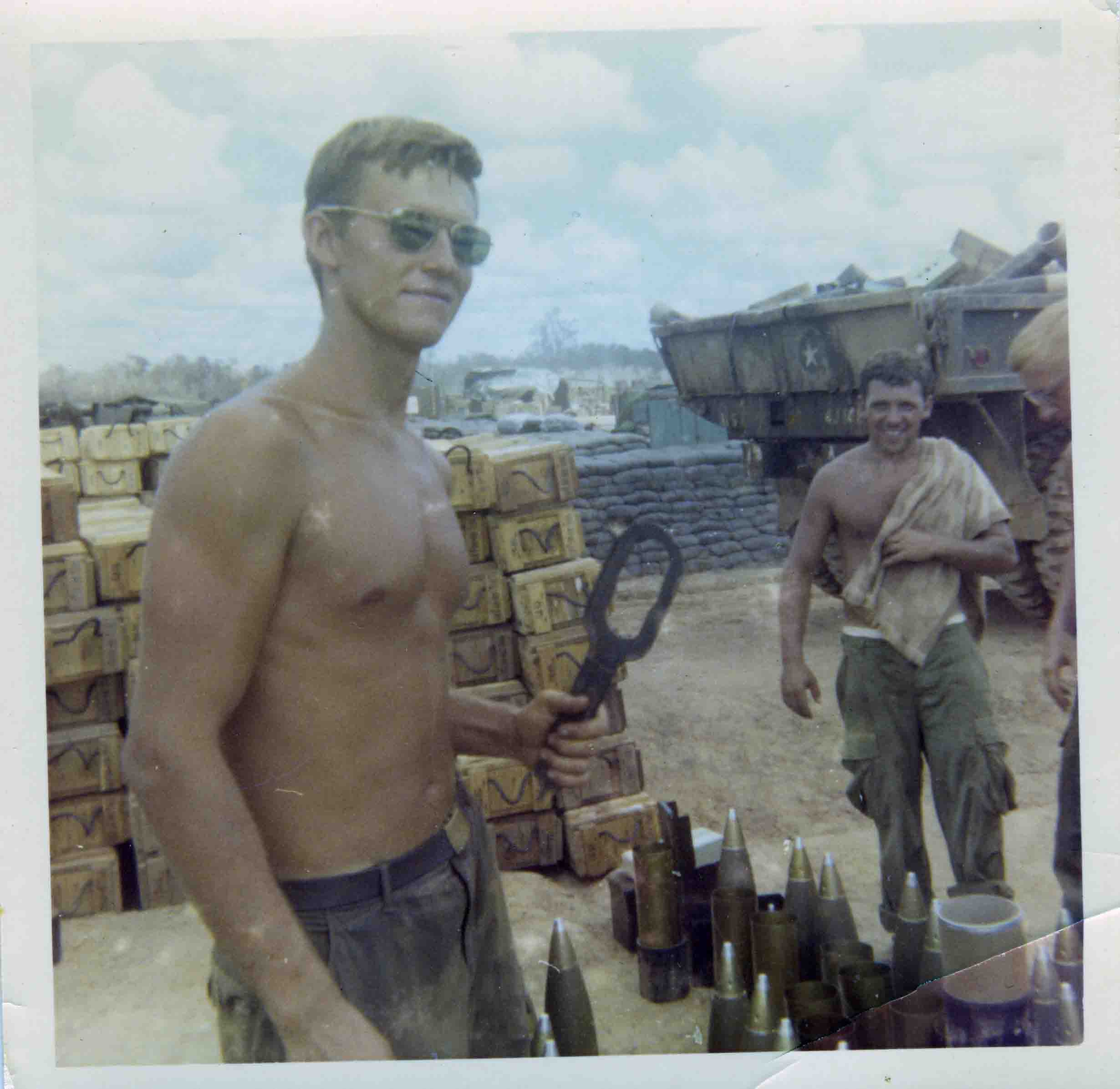