Vietnamese water, ice made from it and vegetables and fruit washed with it were considered contaminated and should not pass our lips. Twenty-fifth Division Engineers supplied our water, and they said it was safe, but learning just what “safe” meant to them was an in-progress education. A glass (pure theory since we did not have one) filled to the brim, then allowed to sit quietly for six hours would drop half an inch or more of dirt to the bottom and still be cloudy. The water supply came from a well drilled at a site selected partly because it abutted a major road. Water was dispensed from a large-diameter hose hanging from an overhead pipe that supplied water in gallons per second and was intended to quickly fill large water trailers. No filling a small cup of water here! The drinking water for our battery and most units stationed in Tay Ninh came from here.

Moving the hundreds of gallons of water the trailer contained to the final locations came one of two ways: pulled behind a large truck or suspended from a Chinook helicopter. We had the trucks and the men needed to pull the trailer, but the helicopters needed to be scheduled with a helicopter operations unit that told us when to expect them and at which helipad inside the base camp. On most days, some emergency would throw the helicopter unit schedule out the window, yet we needed a load of water delivered every day or FSB water would have to be restricted. In theory, mail, water and ammunition should be delivered every day, as it took no time to become dehydrated in the heat, and mail was imperative to prevent an internal riot because of lack of contact with the world. The need for ammunition speaks for itself.

So, water was high on the needs list, and although we controlled our trucks’ schedules, impassibly muddy roads (during the six-month wet season) and ambushes determined where they could go and, subsequently, when the trucks could deliver. We always found a way to get water to the FSB, whether it was alternate routes, alternate means or calling in a favor. Water was critical! 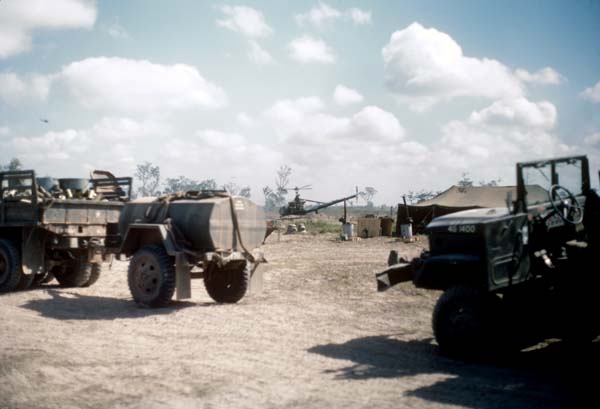 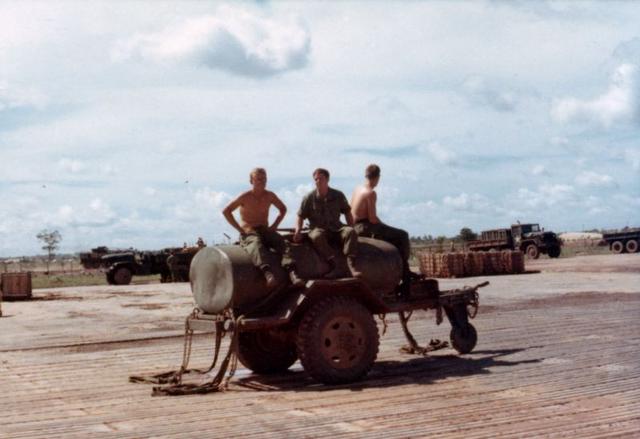 Getting stuck in mud was the major problem when hauling water with a truck during the wet season. But experience even one ambush, and being stuck became worse than bad. While stuck, we were in deep shit, as we were basically like easy, amusement-park targets while waiting for help. It was usually just one or two vehicles in the water convoy, so if jeep or a truck got stuck and attacked, big problem!

When water was delivered by helicopter, someone had to hook the looped end of a heavy rope that trussed the trailer for travel, which was carried suspended under a dual-engine helicopter that hovered a couple of feet above the trailer when it was ready to hook up and move. Some trooper held the loop and attached it to a hook mounted on the underside of the chopper as it hovered, and he held on until the rope was without slack. Both chopper engines would come to full power, and the load would slowly rise to allow the slinger time to jump (rapidly) out of the way of the trailer if it failed to hold. Taking my turn during those dangerous few seconds, hundreds of sand particles became imbedded in my torso (no shirt) and face. Many bled slightly, but the majority did not, as I pushed out each grain out with a nudge from my fingernail. Every spot hurt for a few days, and some could have caused infection, but the risk was a small and necessary price to pay to get water to the field unit. This is a case where being in uniform rather than walking around shirtless would have paid dividends.

Getting water to the battery in ice form was close to impossible. Blocks of ice made from the American water were safe to use (dirt included), but the ice supply was limited and erratic. Anything cold was a treat and a drink with ice inside the container – priceless! The supply of Vietnamese-made ice was also erratic, but more often available. They stored the blocks insulated by rice husks because the local sales outlets had no electricity. The rice husks completely surrounded the ice, so in addition to containing more dirt than the American ice, it literally bristled with rice hulls. Consequently, it was only used for indirect cooling. The blocks weighed in excess of 100 pounds when purchased but quickly began to melt in the heat-laden journey, resulting in a much smaller block being delivered. All we could do was try to get it to its destination as fast as we could. The priority use for drinking water and ice went to the cooks – if we had any at the time – regardless of whether it was American or Vietnamese. We would get temporarily cold drinks using Vietnamese ice by spinning cans of soda on it. These opportunities to get a somewhat cold drink from excess or purchased ice were well worth the effort, even if we had to chug the drinks before they could reheat.

Our shower and metal water containers My photo

As an aside, a higher, well-meaning authority decided that our two insulated containers at the FSB be mixed with Kool-Aid or presweetened iced tea. I guess it was to mask the dirt and purification chemicals. Since those were the only insulated containers in our battery, there was nothing available to hold plain water. As a result, as soon as the cooks had what they needed, individuals would take their own canteen containers and fill them from the water trailer. When I returned to the states, I vowed to never drink Kool-Aid or iced tea again. I went to a store and bought as many packets of Kool-Aid as seemed reasonably unreasonable and slowly, deliberately emptied them out in a pile at a park in Sausalito, CA.  I was still pissed from having to drink that stuff in Nam and thought it would feel good, but it didn’t. It was my irrational retribution.

I also promised myself that upon return to the world, I would have a hot shower every day and absolutely no camping out. In 40-plus years, I’ve only missed a few days on the shower commitment and have been completely successful at avoiding camping. At the FSB, there were multiple ways to deal with water for cleansing issues, such as regular (and trust me, much needed) showers, which were not always happening. I once lathered up in a rain and then the rain stopped, leaving me no way to rinse off, turning me into a walking, soap-encrusted, unhappy soldier. 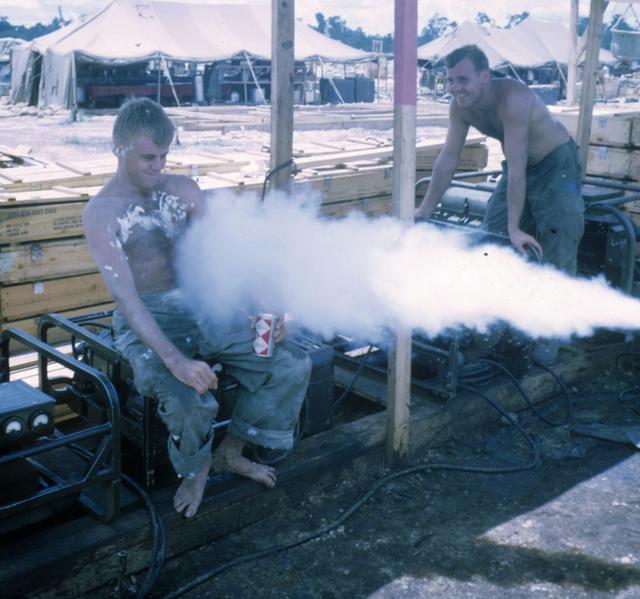 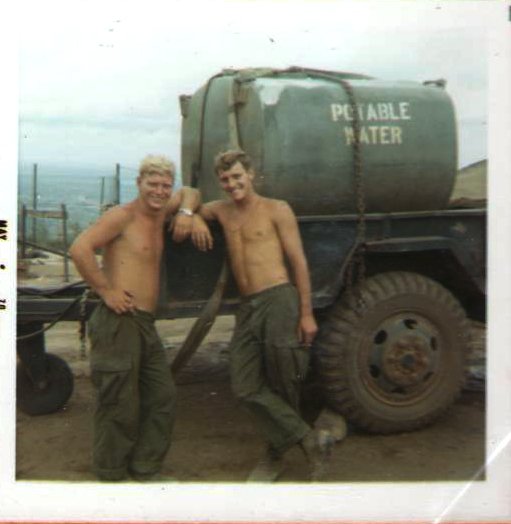 FDC salvaged several Army-issued five-gallon, metal potable water containers to fill when excess water was available after the cooks took what they needed, and the rest became water for personal use. FDC used a two-gallon canvas bag with a head at the bottom that controlled the flow of the water by screwing it in and out like a light bulb, and we hung it from a structure we cynically called a shower. The water flow was definitely low pressure. To compensate and increase our enjoyment, we heated the water by placing the metal water cans close to the exhaust of our generators. Man was that nice! A hot shower in a country with an excess of heat is so wrong, but cold showers are cold showers and seldom satisfying. Cold works to cool down but is not so great for cleansing. FDC was alone in the battery with regard to generators, but not many other men brought cans of water to us to heat, even though there was plenty of time and exhaust to do so.  I don’t remember why.

Base camp was a different story. Each unit had a shower and ours had a big salvaged airplane tank that could supply generous amounts of water (again, in theory) for a shower but the water could only be heated by sunshine. All administrative components had getting water to their field units as a priority, and inside base camp each unit had a tank and a small shower “building.” If water was being rationed, showers were not always possible. Rationing at the base camp would often happen because logistically it wasn’t always possible to get to it due to the time needed to supply those in the field.

Water was always a 24/7 effort – ironic because we were always wet from rain in one season and from sweat in the other. But then, what the fuck? This was our life. 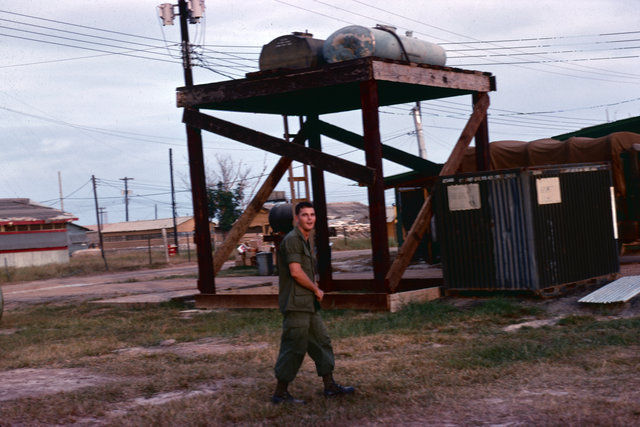