Rice growing in Tay Ninh used dikes to frame the cultivated area of that particular paddy and to hold water inside for the growing season. Land was as flat as Western Kansas wheat fields, so any water contained inside the paddy either fell as rain or was moved by hand from nearby ditches and small streams. No electricity or internal combustion engines were available to power water movement, and I saw several different ways to move water by hand that struck me as futile.

My favorite method was a structure that had a platform eight to 10 feet in the air that had a modified bicycle powering a water wheel with many small containers that were filled from the water source and then dumped on the opposite side of the wheel and into the paddy. Filling a field with water took days of peddling from sunrise to sunset, and the fields were mostly smaller than an acre. Rice fields stretched beyond the horizon in most directions, and all of them needed to be filled with water, so this “pump” was moved from paddy to paddy. The water supply was a maze of narrow irrigation channels flowing past a number of fields. 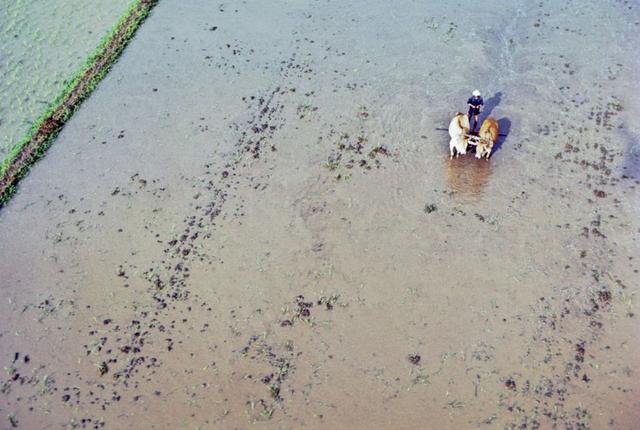 A second method was to use water buffalo that were hitched to a geared, horizontal wheel and walked around the wheel to lift water from the source to the field – at least the beasts of burden were doing the work. During the rice harvest period, stalks of rice were laid like a carpet in the circular path the oxen followed to separate the grain from the stalk. The oxen were simultaneously forced into a second job.

One farmer along a small stream utilized a long bamboo pole as a lever and a post as the fulcrum, then lifted one leaking container of water to his nearby field and then pivoted for another. His motion was so backbreaking, continuous  and rhythmic, a day of that work would be all I could do in two lifetimes. On another of our convoy road trips, I saw that he had removed the bucket and mounted a fishing net that hung from an X-shaped frame. I have no idea if this was successful, but my guess is that it was because Vietnamese farmers did not waste effort.

The most torturous method I saw took two women, each holding a rope tied to what looked like a typical Vietnamese farmer’s conical head covering. They stood about 30 feet apart, and the “hat” was thrown into the water source. Both women then pulled their ropes and lifted the hat to be dumped into the field. Brutal work!

The fortunate farmers had a sluice gate that opened and water ran, with gravity doing the work. The movement and sharing of water indicated to me that some agreement and rules were followed about who could take how much water and when. Water fell in shiploads during the rainy season, so the paddy fields that gravity serviced were often flooded with excess rain, and hand labor was required to flush the excess. Around Tay Ninh, there was either no water or way too much, and a cooperative system seemed to be required to deal successfully with either problem.

Small river. The fishing net was replace with a water bucket My photo 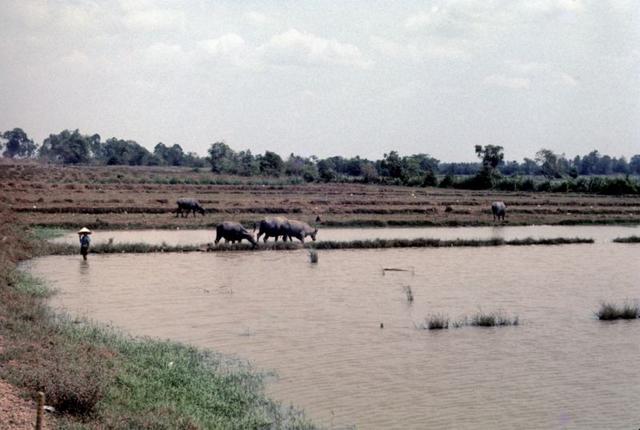