Phil Fortin atop the Virgin. His picture

Despite all the changes and chaos that exist in a movable firebase, almost anywhere my unit landed we had a view of the Black Virgin Mountain, also known as the Black Lady. She was a constant.

To the north and west was primarily triple-canopy jungle, while south and east was rice-paddy country. I think only one road ran north and west past the mountain to access a starting portion of the Central Highlands that ran along the Cambodian border. Roads in the remote areas of Vietnam, Cambodia and Laos were few.

Rising nearly 1000 meters (3,268 feet) above the table-flat, rice-growing country, “she” is an extinct volcano covered in large black basalt boulders and visible for many miles in all directions. Sacred to Buddhists and Cao Dai, which is a regional religion, most of her was controlled during the war by our enemy. Phil Fortin worked at the 1st Infantry Division operation, 121FM Granite Romeo Tango, a radio Re-transmission facility for units of the 1st Inf Div out in the field that could not establish communications with HQ or others. Other military service units such as radio, Recon. and a secret Air Force station also had facilities on top . The Army operated a rock crusher at her base, which was used to create building material for new solid-surface roads and to improve local laterite (clay) roads, so they could carry our large military vehicles at high speed. Tay Ninh roads were originally constructed to carry foot, bicycle, ox carts, motor scooters, Lambrettas and some occasional bus traffic but not our large military vehicles.

Looking down on a Fire Base Phil Fortin Photo The retransmission base Phil Fortin Photo

Both of these military positions were attacked frequently, but numerous attempts by the Army to assault the sides of the mountain, some starting at the top and others at the bottom, failed to take and hold ground. The Lady was said to be extensively tunneled with many large rooms carved into her and used for a hospital, storage and a repair shop for enemy equipment, as well as housing a generous numbers of soldiers. It was a fortress that was nearly impossible to subdue with air power and not accessible to wheeled and tracked fighting vehicles such as tanks. The steep sides and numerous basalt boulders impeded movement by infantry soldiers, so stumbling down was as exhausting as climbing up. We shot artillery numerous times (often without permission) and jet fighter/bombers hit it frequently, but, ultimately, the nature of the mountain seriously limited our success. We never quit trying! When our jet bombers had to dispose of their unused ordinance before landing, they looked for something to use them on – like a difficult-to-conquer mountain.

On a personal note, I did have one direct experience with the Lady due to volunteering for the worst job ever, as it was apparently in my nature to do. It didn’t start out as a mountain experience however. In the middle of one of our seemingly endless days, a command and control helicopter radioed saying it was landing. The passenger and radio caller was a Major who wanted someone to perform as an artillery observer. They were scouting the Cambodian border for signs of our enemy. Sounded like a thrill ride to me, so I did the most forbidden thing in the Army –volunteered to go along. I was enjoying the cool air that came from being airborne when the chopper circled and landed by order of the Major. The pilot was none too keen on this and tried to dissuade the Major, but he insisted. He ordered me to follow him with my M-16 to a suspicious pile of unknown origin in a small clearing. I foolishly had only the clip in my rifle and no extra ammunition when we departed the fire base and felt very nervous out in the open. We found nothing (lots of it). Back to the chopper, and we departed quickly. The Major wanted to look over the Black Virgin, so we headed there. On the way, the Major again saw something I could not and ordered the chopper to land so he could look it over. The pilot was having none of that and refused – not a wise move for someone planning a career in the military. 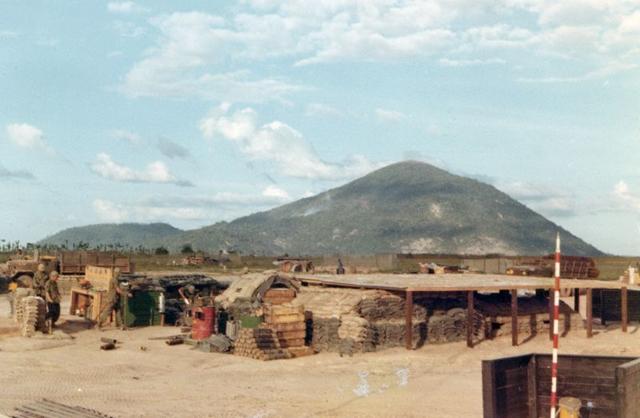 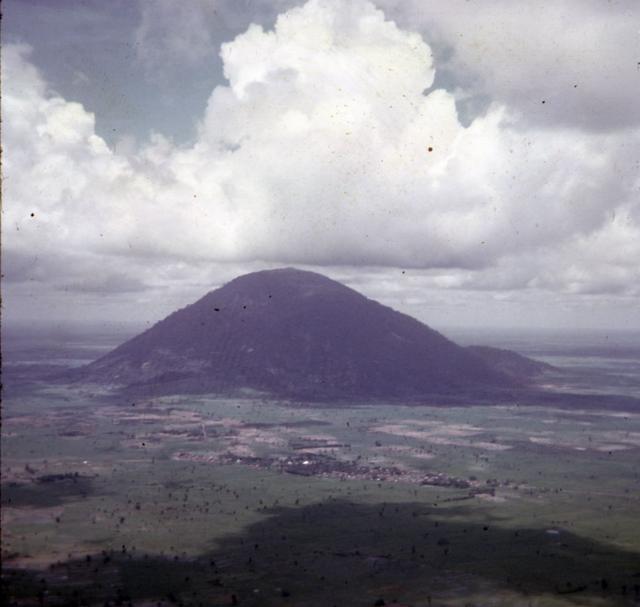 Following the Major’s order, we flew around the smaller, attached mountain while hugging the slope at various altitudes and then moved to the Lady herself. I am paranoid as hell, and after a bit I thought we had been fired upon and said so, but both men in the front laughed. Around the mountain we flew, circling higher with each orbit. I was unable to hear clearly over the rotor, but I kept hearing what I thought was small arms fire. Then I spotted a flash and screamed into my helmet microphone, telling the pilot to move away from the mountain. More and more flashes from small arms joined in the chorus, and the pilot put the pedal to the metal. The Major was calling for air strikes and ordering the pilot to stay close so he could direct and correct the fire from jet fighter/bombers he had ordered for immediate delivery. Then he radioed A battery for artillery fire – my unit.

I knew this would take time, as clearance from the 25th Division Commanding General is required to drop bombs and shoot artillery into “no-fire zones,” and all of the Lady was just that. Then, when I was really needing some good luck, the pilot said he had to depart very soon to refuel. The Major was flipping out that he was going to miss his chance to “kill some Cong,” but there is no winning an argument with a helicopter about its need for fuel! The chopper headed to Tay Ninh to refuel, and the pilot told the Major that he had been ordered on another mission. The Major called for a jeep to pick him up and returned him to the hole he had crawled out of. He was kind enough to allow me to find a way back to the firebase – no surprise there.

I walked toward our administrative “rear area,” and bad luck was shadowing me every step. It was hot and humid on my long march, and I needed some water but had none of my own, so I walked dry. I was carrying my steel helmet and M-16. A jeep stopped, and I saw a ride in my future but no! It was the Military Police (MP). They wanted to see my military ID, and of course it was back at the fire base, along with my canteens of water. My dog tags gave them the info. they wanted, but they were pissed and lectured me about not wearing my steel pot and not having my military ID card.

I asked them for a drink of water, which brought on another lecture about not having my own. I casually mentioned they were chicken-shits, which  prompted them to ask for my rifle, where they proceeded to find a round in the chamber. Another lecture about safety, and I invited them to get outside the wire and come visit me at the FSB. No answer to that but now they asked me for more information. I blew, went off and do not remember clearly how matters progressed, but I got no ride – I remember that! Days later Captain Neal calls me out and lectures me about being out of uniform in base camp. I had no shirt or head covering on at that moment and did not get his drift, as most of us in the unit were dressed this way. The MPs had issued me a DR (Deficiency Report) for being out of uniform in base camp. Ten dollar fine, no appeal. This was my reward for volunteering? No more of that! 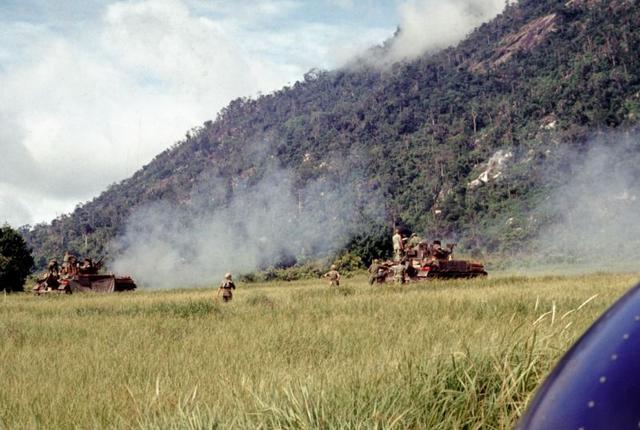 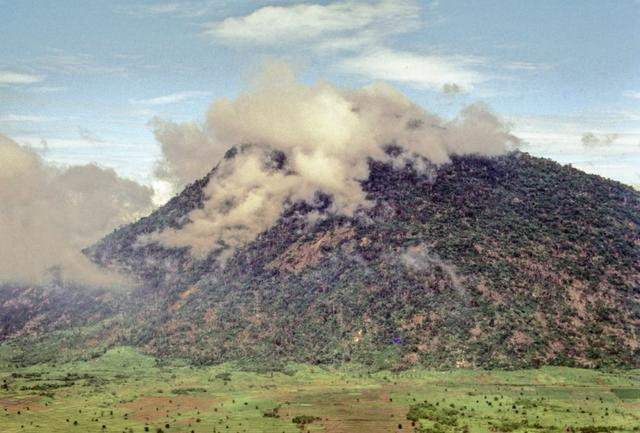