Burning Shit: A How to Dispose of Waste Instructional

Within this story lies one of the many ironies of my tour. Our human waste was valuable to the Vietnamese, and we were burning it.

Burning our shit actually deprived local farmers of valuable fertilizer, used large amounts of gasoline and diesel fuel, served as punishment duty and fouled the Vietnamese sky with a dense, dark black smoke. In Vietnam, human waste was a staple fertilizer. Ours was much richer than that of locals, and each of us out-produced even the best-fed farmer. We could have auctioned it off and made some cash for Uncle Sam or simply given it away.

In base camps, it was a paid job for the Vietnamese, but at fire support bases it was assigned to some poor GI who was out of favor with someone in power. When it came to burning our shit, I think you will, like me, not know whether to laugh or cry, probably both.

To start, the place where we deposited our waste was creative but a sight I seriously doubt you would ever want to see. It would make an outhouse look like the Taj Mahal. It consisted of two stacks of wood ammo boxes, filled with sand or dirt and placed at each end with a door laid flat across them. Underneath this door were parts of 55-gallon metal drums to catch what fell through the three holes into them. This lovely facility was located out in the open, as were we, sometimes sharing our exposure with “company” at the next hole.

What may seem even more unusual – or horrific depending on your privacy issues – was that we didn’t care if we had an audience. When you are in a combat setting, your priorities change significantly. There were way too many serious things to worry about, like being target practice for the enemy there and any other open place. And, even if things were relatively calm, when you live in close quarters in bunkers, privacy becomes an afterthought.

Burning shit was a constant issue, as one side effect of the pills we took made our visits very fluid and frequent if you get my drift. Our food, anti-malaria pills and native bacteria conspired together so that each man, in a firebase averaging 140-200 men, had diarrhea most days. It was a very popular place, creating a significant amount of waste. Pulling these waste-laden cans from under the “thinking platform” slopped the contents around and often onto the person pulling them. The cans to be burned would be half full of a dense liquid with floating solids and a layer of scum at the bottom. The burn location needed to be away from what we fondly called the crapper, so heat from the fire did not stop others from answering nature’s call, many of which were emergencies.

The process of burning our shit required us to use empty replacement cans, heavy rubber gloves, the aforementioned gasoline and diesel fuel, some long stir sticks and a stick wrapped with toilet paper on one end, long enough to ignite the mix from a safe distance. Too much gasoline in the combustion mix could toss the contents a good distance when ignited – never a good thing. Everything had to be present and right to excel at this job!

Anyway, before one of the cans was put under the door, some diesel fuel was added to dampen the odor, repel flies and allow the crap to marinate in a combustible liquid. The diesel soaked into the solids and made the next burn go faster. Once ignited in the actual burn stage of the process, the mixture was stirred and more diesel fuel added as the fire lessoned; gasoline was very dangerous to add but necessary at times. The burning cans also needed to be spaced far enough apart to allow a cool space to move around while stirring. Time passed slowly, and it seemed the contents would never burn away, but hours later a dark, dry residue would be all that remained. After the can cooled, the contents were dumped into a hole and covered. Everyone on that duty knew that a change of clothes and a shower were a must before being welcomed by others.

Like many things in Vietnam, the two-to-four hour job of burning was weather dependent. Rain, of course, slowed the burn, while wind could whip the smoke up. But it was a no-win situation because if it were too calm, the smoke hovered over the base. Its black particles clung to anything they touched, especially the lucky GI burning it, and its odor was horrific. If it were a calm, clear day, you could look around and see this highly adhesive black smoke rising from three to eight other firebases simultaneously. If there were any kind of breeze, even a light one, the smoke that didn’t attach itself to us would fill the sky.

Men not on burn detail, including enlisted or big-shot officers, seldom came close, so it was an escape in a crazy sort of way. Social stigma was written all over this detail for very sound reasons, but it actually provided a time to be alone and not be instructed (harassed) by leadership (lifers). Some men turned it into an all-day work detail.

Not all of us desired it, however, because many problems happened with this detail, and one of the worst was when the cans were filled too close to the top. This meant part of the contents needed to be poured into an empty can, and the only grip was near the handholds cut near the top of the can. There was no way to avoid having your face very close to this smelly treasure, and any rapid movement set off tidal waves of overflow that landed – yes – right where you are thinking. And, you needed to keep the stir stick in motion to prevent it lighting on fire. Being assigned this detail was not a good thing; it was a hot job in a very hot country.

Our artillery was on call 24/7 and a fire mission would bring work details to a stop, at which point the two main jobs became shooting the guns and getting fused 105mm rounds ready and in place at each howitzer. The immediate, overriding priority on any day was fire support and protection, whether it was for those in the field or ourselves. The burning cans were left on their own, along with other daily tasks – they no longer mattered.

As an aside, for the other half of our human waste, we urinated into fiber shipping tubes (piss tubes) that came with each 105mm howitzer round and stuck in a dirt pile. We had several located around the FSB. This system was to reduce the volume of water to be burned off and keep the men from urinating where they stood. At least we could say that between the two bodily functions, we did what we could to reuse and recycle! 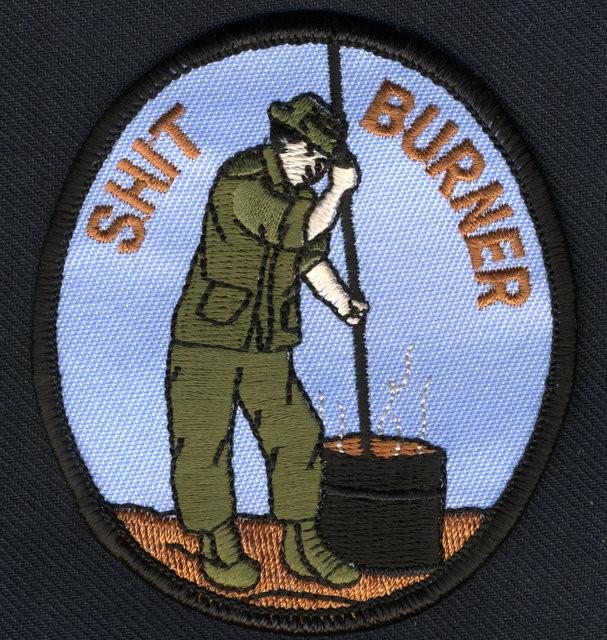 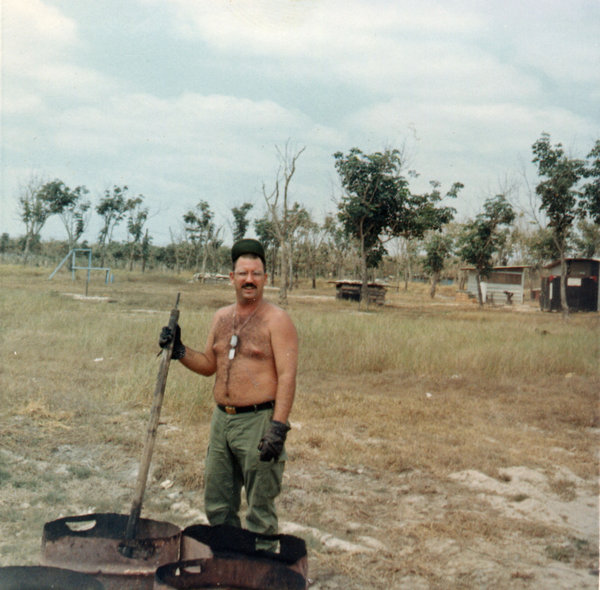