During most of my tour, eight months or 21,168,000 seconds, our staple fare was 1943 packaged C-Rations until they were replaced by the 1968 Series in March of 1969. Thirteen basic meals were the total number of menu choices in the 1943 series.

Each box included one of the 13 “chef-designed” main-course meals. Rounding out each meal were items such as soft biscuits, soft cheese, fruit, a “gourmet dessert” and sometimes what I can only call a surprise item. Included in a foil sack were things like toilet paper, waterproof matches, Chicklet chewing gum, napkins and a little package of four cigarettes.

On a few occasions, a mess tent was set up, but the chefs lacked the military standard A-Rations, so they disassembled the C-Rations, took out the individual main meals, threw them into a pot of boiling water, fished them out and tossed you a super hot can. It was up to you how to catch it as you walked down that first station of the chow line. The next stop was stocked with items like biscuits, semi-soft cheese, candy, peanut butter, cookies, jams, jellies and fruit, which were all included for nutritional balance. There was an almost unlimited supply except for the peaches, fruit cocktail and pears, which were grabbed the minute they hit the table. The last station consisted of foil-sack goodie bags containing the aforementioned dining necessities. Voila – dinner was served, and we always got outdoor seating! If you were in the good graces of the failed cannon-cockers who had been magically transformed into chefs, you could ask for what you wanted. If not, you suffered a randomly chosen main course. The least favorites were spiced beef with sauce, ham and lima beans or mini-franks with beans. The frank and beans went under the alias of “beans with motherfuckers,” but most of the other meals were equally horrible, unless you lucked out and got chicken and noodles.
Other than these infrequent restaurant meals, we were left to our own devices to individually heat our own C-Rations using a pinch of either unused gunpowder (which was in abundance) or plastic explosive. Before heating, you needed to puncture pressure relief slots in the cans with your P-38 can opener because of the rapidity with which the fuel flashed-cooked the liquids into steam. John Clark, harassing an FNG named Murdock, demonstrated the heating process without including the pressure relief. Murdock bent over with his waterproof matches, lit his gunpowder and before he could stand erect, his can was launched and became a rocket smacking him in the forehead, knocking him on his butt. He wasn’t evacuated but walked around with the mark of the can on his forehead for a week or so. It wasn’t clear enough to see the machine-stamped details on the can, but the circular rim could not be missed.

We operated 24 hours per day, as did our hunger, but when you got the munchies outside of meal periods, your military issued options were more C-Rations. Care packages from family, friends and women’s social organizations from small-town groups and citizen support groups often sent food that provided variety. You know who you are – thank you! But Cs made up 90% of our munchie choices. What might seem like another option, fresh food from the locals, wasn’t happening, as they were slowing starving and needed everything they grew.

So what was a soldier in Vietnam to do to celebrate special occasions, such as surviving the day? Make pizza from unwanted C-Ration ingredients! We used a C-Ration cookbook from the McIlhenny Tabasco Company to try to recreate a taste of home. In case you run across some 1943 C-Rations and have time on your hands, here’s the recipe from the cookbook, adapted by us and made completely from abandoned C-Rations.

Open the five cans of raw ingredients, leaving the lids slightly attached on two of the biscuit cans. The biscuit leaves no residue on the inside of the can and works as a perfect Vietnam pizza pan. With the third can, save the lid and toss the contents. Use the lid to cut four thin slices of biscuit. Put one slice each on the bottom of both of the cans that still have lids. Remove the spiced beef with sauce and semi-soft cheese from their cans, add Tabasco and mix briskly in the now lidless and empty third biscuit can. Put half of the toxic mixture, being careful to avoid all sensory contact, on each bottom biscuit slice, add the other slice of biscuit on top and fold down the partially attached lid until closed.

Crumple some toilet paper as a base inside the empty C-Ration box, insert the two cans filled with the soon-to-be-born pizza and pack wadded up toilet paper around them. Make a fuse of toilet paper, light it and back away! You will know it’s done when everything is completely burned. For a crisper crust, daring cooks used two toilet paper packs – your call.

Often we ate in multiple, small groups scattered around, and with each person fixing his own pizzas, a comedy play was acted out as we sampled each cook’s creations and discussed preparation variables. Then off each person went to create a new and better batch. The finished pizza was about the size of a slider sandwich, and some men could eat eight or more at a sitting (or standing) so prep, cooking and eating them often set off an impromptu party. Soldiers would be cooking, handing off pizzas, talking and laughing with no agenda other than downtime and companionship – a much-needed break from the usual rigor and organization of our days.

We had unlimited ingredients but not unlimited time as the enemy and weather did not even come close to following a schedule. The pizza party would come to an immediate halt, and all pizzas made or in progress were discarded. When we did have uninterrupted time, we would hold a contest for the best pizza, which was highly contested. After all, the sought-after prize was more of the unlimited and orphaned C-Rations! When you are desperate for fun, even pizza party R&R and pseudo competitions are welcome.

1943 series C-Rations were our staple fare from August 1968 to March 1969 when the 1968 series replaced them. Often we had meals from our Battery Mess and often we did not. We operated 24 hours per day as did hunger, so if you got the munchies outside the meal periods your options were few. CARE PACKAGES from family, friends and womens social organizations (THANK YOU! You know who you are.) provided food with taste variation but C’s made up 90% of snack food. The Vietnamese were so poor they had little food to sell or donate to the allied cause.

13 basic meals were the total menu choices in the 1943 version. Each package had one, and other items from the list below and an accessory package. All meals and items are listed below the pizza recipe. All ingredients for C-Ration pizza except the Mc.Ilhenny Tabasco Sauce are taken from C-Ration boxes. The maker of Tabasco sauce sold a C-Ration cookbook and a bottle of sauce, delivered in Vietnam for $5. They made me a lifelong user of Tabasco.

I am sure the receipe below is partly theirs and partly our adapting.

Open all 5 cans with the P-38 leaving the lids slightly attached on 2 biscuit cans. Use the removed lid to cut 4 thin slices from the biscuit, toss the unused biscuits. Put 1 slice on the bottom of the 2 cans with attached lids. Use the plastic spoon to remove the beef and cheese to the third biscuit can, add Tabasco and mix briskly. Put half of the mix on each biscuit slice, add the other slice on top and fold the lid to the closed position.

Crumple the toilet paper and stuff it inside the C-Ration box, put the pizza cans on the toilet paper, close the lid and light it. Daring cooks used 2 toilet paper packs for a crisper crust. Shortly you enjoy hot pizza. It was decent given the circumstances.

Side note: While McIlhenny Tabasco Sauce made me a forever lover of tabasco, for some reason I have had no desire to recreate 1943 C-Rations, their sidekicks or the accessory packs that came with every meal. To give you an idea of what we were eating when we weren’t making pizza, below are the varieties of C-Ration main courses which we consumed a mere 25 years after they were packaged.

Beef (and lots of it) – Meatloaf, Spiced Beef with Sauce, Beef Steak, Beef Potatoes and Gravy, Meatballs and Beans, Spaghetti with Meatballs

Other (a.k.a. unrecognizable) – Turkey Loaf, Beans and Weiners 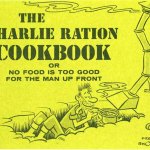 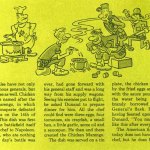 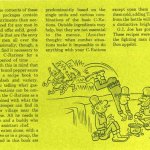 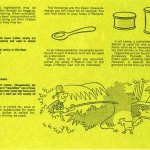 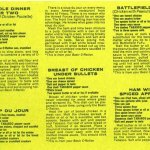 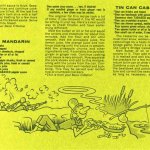 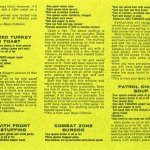 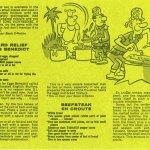 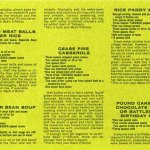 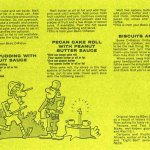 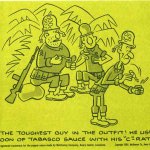 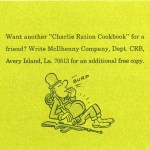 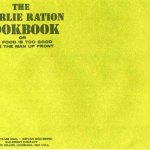