“Home” for the Holidays

It was winter at my home in Kansas, but here every day the temperature passed 100 degrees and seldom dropped below 80 at night. The rain was gone and clouds to shade the sun for a few moments were infrequent. Dust filled the air, so taking a deep breath was choking, and the inhaled air was scorching hot. Merry Christmas from Tay Ninh, Vietnam. 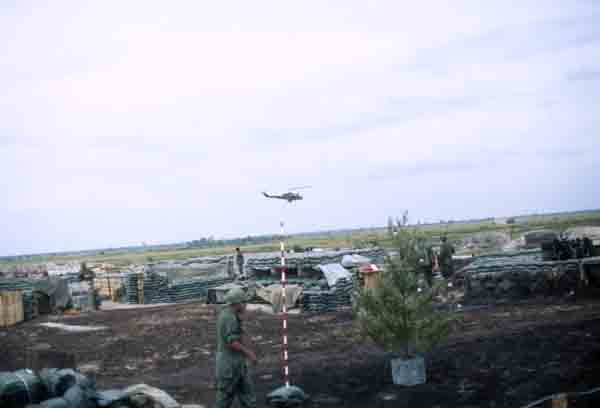 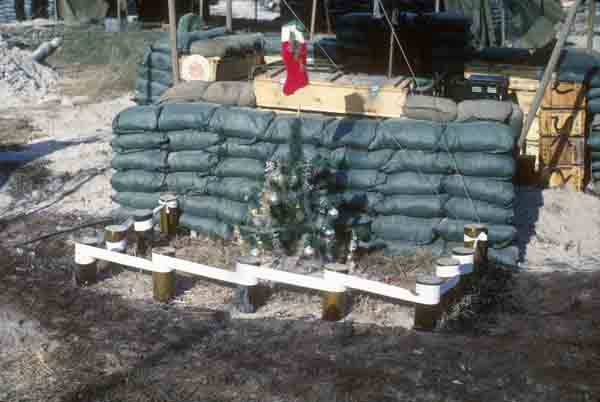 Christmas in Vietnam started early, as CARE packages sent by small-town American social groups and our families began arriving in early December, and the arrival rate increased each day that mail was delivered. Smoked oysters and octopus were on the daily snack menu, set on crackers and covered with a novel, gourmet idea: semi-solid cheese dispensed from an inverted can by bending a nozzle. Sardines and many other canned-fish products were included, along with a wide assortment of salami-style dried meats. One group sent several cases of Del Monte canned peaches, which disappeared faster than social flatulence and were so good. Peaches were, by consensus, the favorite item included in 1943 C-Rations, with pears and fruit cocktail trailing by a wide margin. Thank you to every person and group that took the time and effort to send us holiday goodies. I have to say, however, that the contents of one of the package went unused, as the senders were under the impression we needed deodorant and aftershave lotion. It was a kind thought but using them would be such misfit aromas in our rural environment of rotting plant material and animal manure that they would be unacceptable and just plain weird.

Many of the packages contained an item new to most of us, an artificial Christmas tree. Ten or more arrived in our battery and were decorated and displayed around FSB Washington III. Fortunately, we stayed there until the holiday season was over because when we moved, all but the most valued optional items stayed behind due to very limited space when we traveled by land or air. The day before Christmas, someone delivered a real pine tree that was in really bad condition and had only a faint resemblance to a Christmas tree back in the world. It dried up in two days and was not going to pull out of its decline no matter how much we watered it. 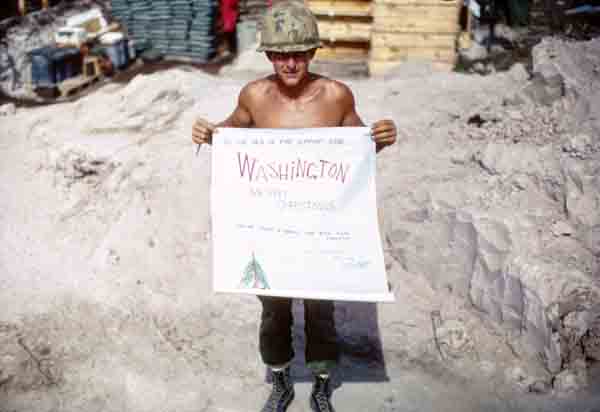 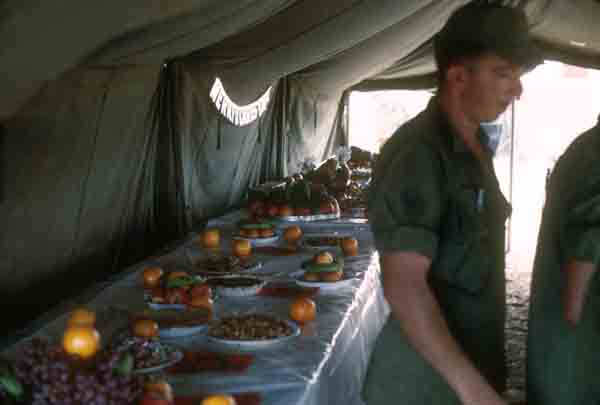 The Air Force sent us a huge special delivery Christmas card. It was tossed out of a small propeller-driven plane that was quickly followed by two jet bombers flying so low that the faces of the pilots were clearly visible, but only for the blink of an eye. All we knew is that they had radioed to let us know they were coming to “drop in” for a Merry Xmas. We ran outside, hollering to others to come see. The card was just the start. After it was dropped safely into our midst, two jets suddenly flew by just 100 feet off the ground. For whatever reason the pilots buzzed us, it was a thrill, as the sound and fury of low bombers is unbelievable. It is so fast and loud, trailing away rapidly after an instant, that there is no way to keep your body from speeding up with adrenaline. And these guys made sure they were as loud as possible. Whether it was an order or just some guys fucking around, it was a much–appreciated and welcome Air Force holiday effort.

For most of the holiday season, I’d been feeling lonely, isolated – no family, friends, no one in a Santa suit and not in my usual holiday spirit. There I was feeling sorry for myself and BOOM! Out of the sky drops a Chinook helicopter stirring dust clouds on a day with no wind to blow the dirt away, so dust slowly resettled on our base and everything in it. Then, like a dream, out of the dust cloud walked American angels, female Red Cross workers and a few dudes in military uniforms carrying musical instruments. In the middle of FSB Washington III, they set up as an entertainment group on a floor of penta prime (soil binder).  Suddenly they had what could only be described as “just stared into the unknown” looks on their faces. Particles of black penta prime had instantly jumped on anything they set on the ground and collected on them and their clothes whenever they moved. Despite their new, tar-like accessories, they were true performers and belted out folk songs popular in 1968, ignoring the crap on and around them. Later, when washing those clothes, they discovered a truth of our lives; it would not wash out. In this case, it was true that no good deed goes unpunished, as they traded good will and effort for penta prime hell. As they played, the audience and performers flocculated into a single mass, and we had a hootenanny gathering in the middle of nowhere. Joining a group and singing along brought a warm feeling to me, a spark of holiday spirit that I did not want to end. 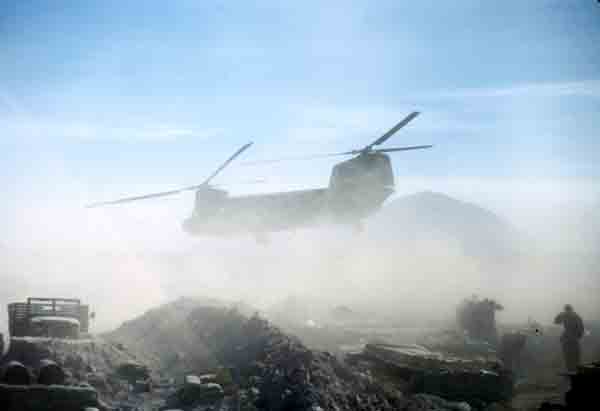 Ready to sing. My photo

Neither of these events, the card bombers and the singers, happened on Christmas Day. But efforts to help us celebrate weren’t over. Christmas day was another 24-hour work cycle for us and one that actually had more stress. We were on alert due to a possible prisoner exchange, so we were not even able to experience our everyday routine. Added stress, along with the effects of our constant lack of sleep, made Christmas Day in Tay Ninh a tough one, but it was also one where we were reminded we were not forgotten as we ate a military “home-cooked” Christmas dinner. 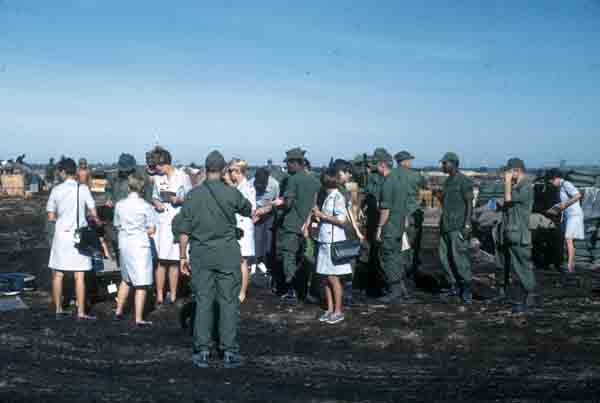 What the hell is this black stuff? My photo 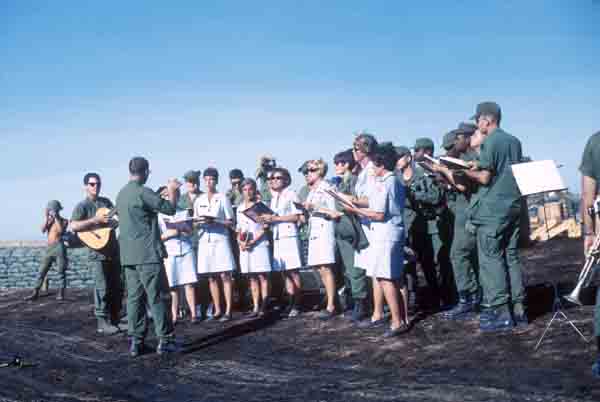 The show must go on. My photo The 25th Division had gone all out to deliver a traditional and hot holiday meal to every member of the Division, and if they missed anyone, it was not for lack of effort. Turkey, pies, dressing, mashed potatoes, gravy and, best of all, fresh fruit made up our treasure chest of holiday edibles. New, but not a hit, were dehydrated shrimp with cocktail sauce. A heartfelt salute goes out to the commanders of the 25th Division for the gift. It provided a much-needed break and a chance to “touch” home. 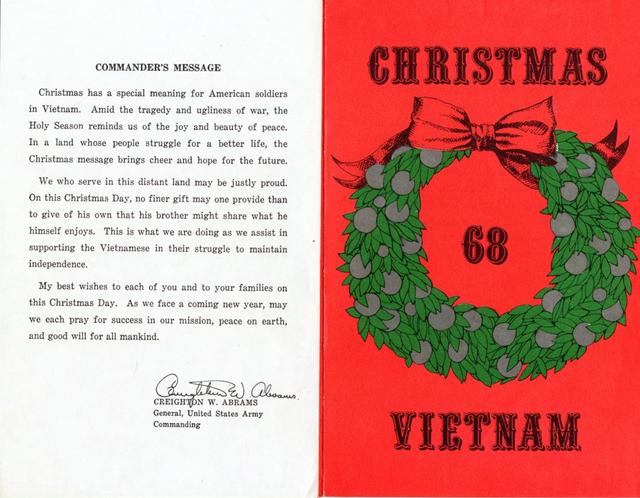 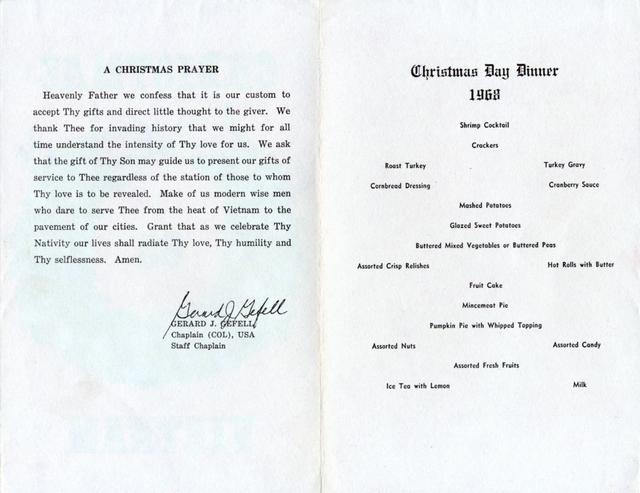 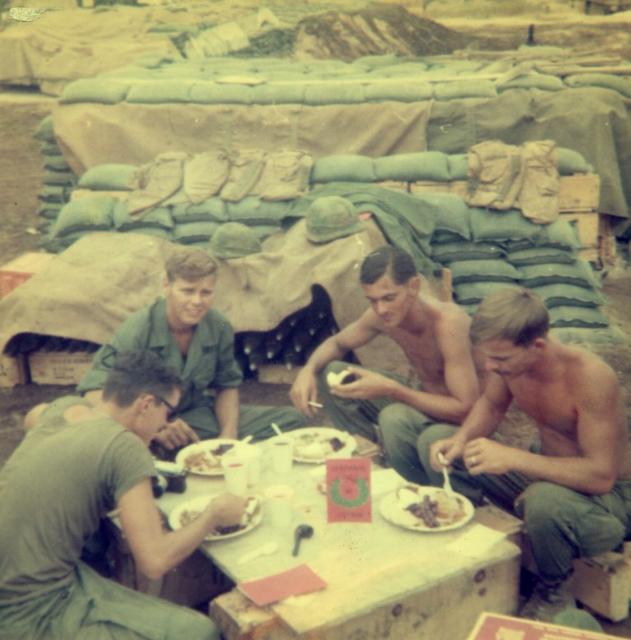