Tay Ninh’s weather consists of two seasons, wet and dry, but for us the seasons were better named mud and dust. They split the year fairly evenly, and change in seasons was gradual during both transitions. The seasons were about equal length in duration, but each had its own special tortures. In mud season (monsoon), it rained nearly every day. In dust season (no monsoon), it very seldom even threatened to rain.

The night sky was a good way to clarify the difference between the two seasons. On a clear night in the wet season, stars covered every space in the heavens. On moonless nights, my eyes easily adjusted to the ambient-light level, and I could see rice paddy country in surprising detail. The number of visible stars was multiple times more than I remember from my rural, starlit hometown in Kansas in the 1950’s. During the dry season on a moonless night, Vietnam’s visible star count was less than 100, the light from them dimmer, and they were only seen in a small circle directly overhead. Dark was dark, and dust was the reason. 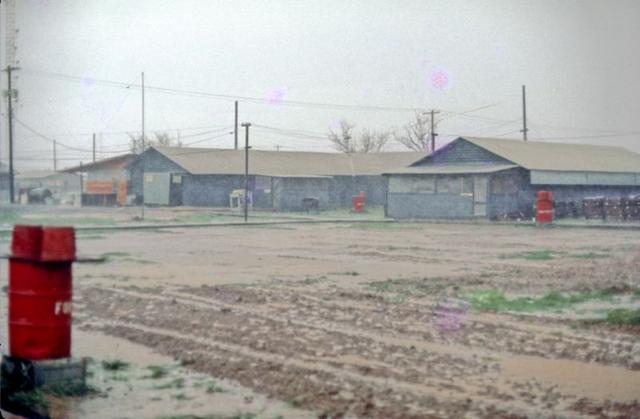 We lost the dust war every time, every day; there was simply too much of it. Tay Ninh air was saturated with it from the Vietnamese who were living and working there and compounded by our military operations. Our artillery fire produced concussions that lifted fine-grain, ground dust into the air, which created a dust dome over our FSB. Only wind or rain would chase the dust away, and both took long vacations. Helicopter takeoffs and landings were dust cannons as well, so breathing and working around helicopter operations was not healthy. The only thing we had that could keep us from breathing in dust was a gas mask. When it came to a choice of trying to diligently suck allegedly clear air from inside a hot, all-encompassing, black, heat-absorbing, rubber face-mask vs. going mask-free, it wasn’t even close. Vietnam was so hot that no one put on a patch of clothing or equipment that wasn’t absolutely necessary at the moment.

Dust affected our exposed skin as well. When I went back to the world, I thought I had a Vietnam “tan” from working shirtless in the relentless heat. Apparently that wasn’t the case because after a week of real showers and brushes, my tan literally washed away. I had been protected from the sun by a dust shirt – repeatedly accumulated thin layers of dust that had joined forces to the point where they could not be washed off with our limited shower opportunities at the FSB. When we did shower, it was almost an “over before it’s begun” situation, as two and a half gallons from a cloth bag doesn’t do much.

It wasn’t just our bodies that were succumbing to dust issues. It was so very fine that it could infiltrate sealed items such as a water-resistant wristwatch. Moving parts on machines were in danger of being ground away by the abrasive dust that inserted itself. Petroleum lubricants were used to mitigate the damage, but more dust just stuck to it, creating dirty grease.

Dust from Chinook helicopter. My photo 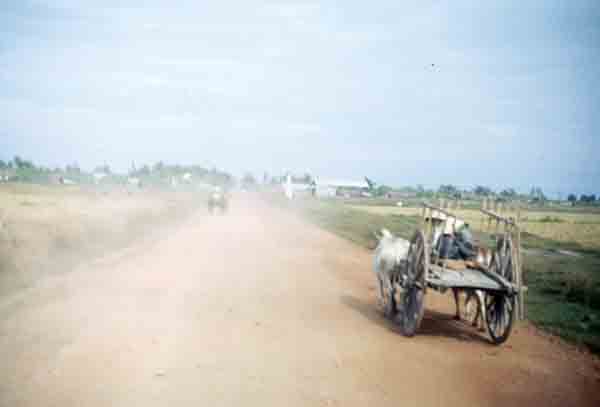 Penta prime was the army’s solution to the dust rising from the firebase floor, but it was a futile effort, basically a fucking mess. Any liquid-holding container we could get our hands on, like buckets, were what we used to apply the material. There was no way to spread the substance evenly, not only due to the lack of any effective spreading tools, but also because it didn’t absorb easily. It tended to adhere to itself more than it would to the dust, and the result was a spider web of oily fingers of sticky petroleum, complete with gaps of every size. We put it down anyway only because something was better than nothing (and we’d been ordered to), but walking on that crust built a growing pad of oil/dust layers on the soles of our boots. I can still see penta prime on the once light-blue clothing, handbags and equipment of the Red Cross “entertainers” who came at Xmas to help us through the holidays. The “tar” defeated everyone who tangled with it, and I don’t think it ever completely washed out from our persons or possessions while we were there.

We were a mobile unit, and when our convoy travelled on red laterite roads, riding behind other vehicles was similar to being in a sandstorm and tasted very much like one. On a calm day especially, the rear vehicles in the convoy tended to lag behind just to be able to see the road! Convoys were protected by interspersed APCs and tanks that were propelled by metal treads and threw up geysers of dirt and dust. Being behind either at high speed was a three-course meal!

Dust’s better half – mud – came with its own unique pleasures. All Vietnamese mud said “slow down” or “wait here” to both man and machine. Daily monsoon rains filled our part of Vietnam with water, and due to the flat landscape, it stayed near to where it fell. Rice paddies were full, roads were slop and their ditches were full of water. Our bunkers leaked, smelled of wet canvas and everything grew mold. Any paper with glue, like envelopes, got damp from humidity, and the seal was promptly useless. Sandbag-filling material became a nightmare to handle because our dust had turned to mud. Even the floors of the bunkers were wet and muddy, as the rain raised the water level so high, it infiltrated from underneath.

Walking in the mud was like walking in taffy. Every step was a struggle, as our boots wanted to stay behind, and the mud just built up, making them constantly heavier. Penta prime was no help in the wet season either because it would bind to the wet soil. Our feet looked like the tops of tootsie roll pops. It was pointless to try to reduce the amount because we were standing in it. Seriously, what tool are you going to use when mud is everywhere in a flat environment with no hard, dry surfaces? It would have been a fool’s errand to try and take it off because the first step afterwards would start the cycle over again – the mud was inescapable. 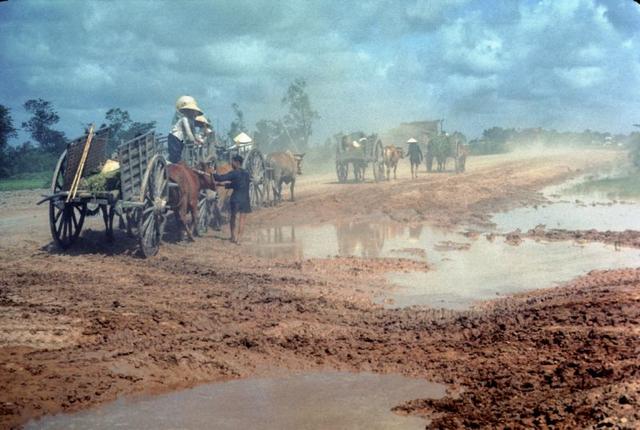 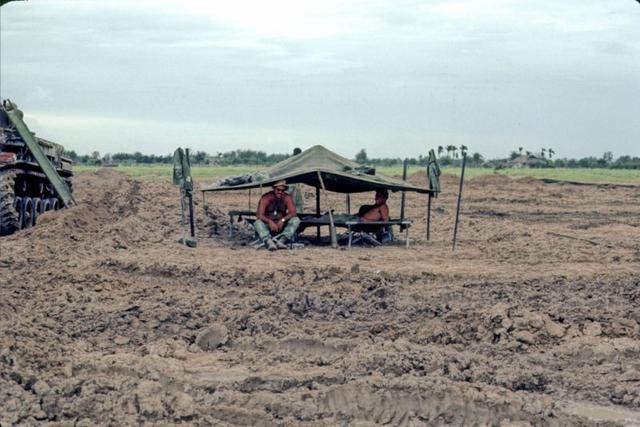 I began to mold as the mud season set in. Being wet for hours each day was common, and the only time I was ever cold in Vietnam was when soaked by rain. I developed “crotch rot” and had to stop wearing underwear so my inner thighs could heal, but they never did until I exited Vietnam. I wasn’t the only one making this choice; this style statement was our best move. It was hard for me because it was “less civilized,” and I hung on to that urban myth longer than most. But here’s the problem: while our uniforms didn’t absorb water, our cotton underwear did. And due to rain and perspiration from the heat, our skin was always wet. Once the skin got chapped, it not only stayed that way, it got worse. Constant pain and discomfort or go commando—civilization be damned!

It wasn’t just humans who carried this mountain of mud around. It accumulated on every piece of equipment used outdoors, and removing it was on the list of never-ending jobs. At one point, our unit set up in a swamp (FSB Schofield) for four days and three nights during the lovely wet season. The movement of men, machines and supplies for this relocation was transported using a combination of helicopters and trucks. When the trucks arrived, one of the powers-that-be ordered a truck to be driven into the swamp. Soldiers are taught to obey, ask no questions, so that is exactly what the driver did. John Clark, a gunner and friend of mine to this day, stuck a two and one-half ton truck so deep in the mud, we had to call on the “Super Hook” to pull it out. The Super Hook was the most powerful helicopter the US operated, the CH-54 Sky Crane, and it could lift in excess of 12 tons with its two 4,500 HP engines.

During the four-day  “mud event,” Super Hook was also used to pull out a howitzer that had buried its trails during firing. Howitzers want to dig in the ends of their trails with each round fired, as the force of shooting the guns drives them downwards and backwards. In this case, the spades attached to them went deeper into the bottomless mud with each round. It was Super Hook to the rescue of both again when we were ready to leave, and it worked hard to pull each one of them loose, along with any other mud-attached earthly elements. All I can say is that there was a hell of a loud sucking sound when each one finally broke free.

Whether it was dust or mud, enjoying the weather in Nam was an integral part of our lives. If you wanted to survive in Vietnam physically and mentally, you did what you could and laughed or cried at the rest. It was all about survival, and weather was just another opportunity to find a way to get through the day.